You are at:Home»Opinion»Sakho Injury Worry For Klopp 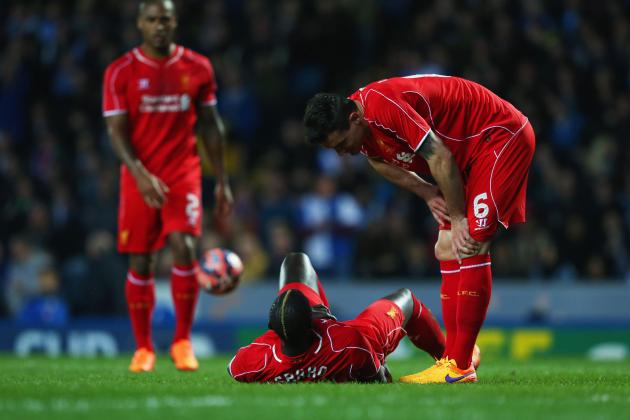 Liverpool face an anxious wait over the defender’s fitness after the Frenchman damaged his right knee when landing awkwardly after a challenge with Crystal Palace’s Yannick Bolasie in the first half of Sunday’s game at Anfield. Sakho initially tried to play on with the problem, but was forced off five minutes before half-time. Sakho left Anfield on crutches, with his knee in a brace, telling reporters he was unsure as to how serious the injury was.

After the game Reds boss Jurgen Klopp confirmed the 25-year-old would undergo a scan on Monday evening to discover the full extent of the injury, but admitted it would be a big blow to lose to in-form centre back. Klopp said: “I don’t know. It’s too bad that he couldn’t play on, but we have to wait for the scan tomorrow evening, because it needs a little bit of time. I don’t want to speculate, but of course we hope that it’s not too serious. That was the worst thing in the game, I would prefer to lose 4-1 and keep him in the team. Now we have to see.” Liverpool have already lost two players in Joe Gomez and Danny Ings to cruciate ligament injuries this season, while Daniel Sturridge is also sidelined with a knee problem. With skipper Jordan Henderson, vice captain James Milner and long-term injury victim Jon Flanagan also out, Klopp will be hoping Sakho’s problem is not as serious as it initially looked.

After a relatively slow start to his Liverpool career since singing from PSG for £18 million in the summer of 2013, Sakho has established him as a mainstay in the Liverpool starting eleven this season and has become a firm fans favourite due to his roaring passion and commitment. With Dejan Lovren having to make do with a place on the bench in recent weeks, Sakho and Martin Skrtel have developed an understanding in the heart of defence and ultimately become the first choice pairing. Such is his popularity around Anfield that Sakho has even captained his team this season in the absence of regular skippers Jordan Henderson and James Milner.

After finally finding his true form and greatly impressing this season, traders on the Football INDEX have been quick to snap up the 25-year-old France international. You can purchase a Sakho ‘future’ now on the platform for just £1.02.