You are at:Home»Opinion»Neymar Wins It For Barca Again 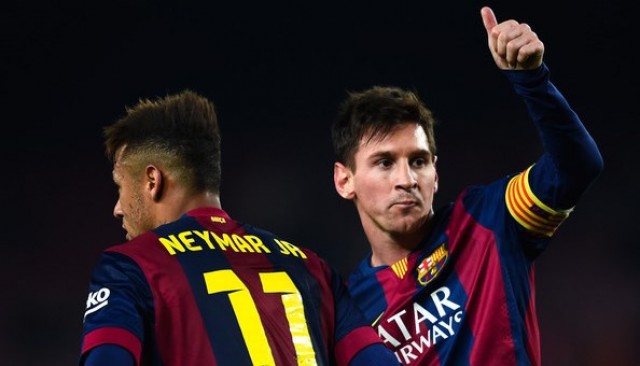 Neymar was once again amongst the goals yesterday as his delightful flick and volley ensured a spectacular double which proved to be enough to see Barcelona win 3-0 against Villarreal to go back to the top of La Liga.

The in-form Brazilian, who now leads the La Liga scoring charts with 11 goals, opened the scoring with a clinical finish having been set up by a defence-splitting pass from Busquets after 60 minutes. Neymar and Luis Suarez have come to the fore in the absence of injured talisman Lionel Messi and Suarez converted a penalty after 70 minutes following a foul by Jaume Costa on Munir El Haddadi. The two combined again, with Suarez finding Neymar who lifted the ball round Costa and knocked it home after 85 minutes. The pair now have 16 goals between them from the last six games.

Neymar who after the game was speaking to Spanish reporters said: “We played well and created a lot of chances. We need to continue this way. I am happy with the way I am playing but I think I can still do better.”

The win takes Barcelona to the top of the table with 27 points from 11 games, three more than their biggest rivals Real Madrid who lost to Sevilla. Atletico Madrid are 3rd with 23 points and the impressive Celta Vigo are fourth.

Barca, who as expected had plenty of possession during the game found it difficult to break down Villarreal in the first half with the visitors posing a threat on the counter and going close through former Tottenham striker Roberto Soldado and also Samuel Castillejo. Villarreal’s resistance waned after the break, with the players looking tired, and Barca’s talented forwards took full advantage to devastating effect.

After scoring his 10th goal in 9 matches since Lionel Messi’s absence, Neymar has truly proved himself to be a main piece in Barcelona’s puzzle and his form also suggests that there is in fact life in the Barca team without Messi. After excelling in the last six weeks, traders on the Football INDEX have rushed to grab a piece of the Brazilian by purchasing ‘futures’ in the player at just £3.46.