You are at:Home»Uncategorized»English Teams Lose Again In Europe 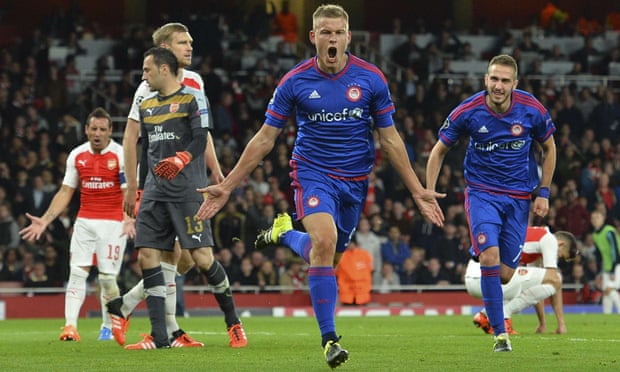 It was another night to forget for English teams in the UEFA Champions League as both Arsenal and Chelsea slumped to defeat against their Greek and Portuguese opponents respectively.

In what seems to be a growing trend amongst English teams in recent Champions League campaigns, there was once again to be nothing to shout about from a Premier League perspective with two disappointing defeats. In a week where it has been well documented that the Premier League could be overtaken by Serie A for the four Champions League spots for domestic teams, English teams were to crumble once again as Arsenal were shocked at home to Greek team Olympiakos and Chelsea faltered away at FC Porto.

After a poor performance on match day one where they lost 2-1 to Dinamo Zagreb, Arsene Wenger labelled the match against Olympiakos as a must win game. With a double header against Bayern Munich to look forward, Arsenal really needed a convincing win at the Emirates to stand any chance of qualifying. After a poor start from the hosts, Olympiakos took the lead through Pardo in the 33rd minute. Arsenal responded well and hit back barely two minutes later when Theo Walcott struck, with a little bit of help from the away team’s keeper. With David Ospina being preferred to Petr Cech in goal, the Arsenal manager was to have his head in his hands in the 40th minute as Ospina made a terrible hash of a simple catch to gift the Greek team a another goal lead. Arsenal started well after the break and were level on the 65th minute after some intricate play was finished off by Alexis Sanchez. Almost instantly after the second equaliser of the night, Olympiakos hit back and took the lead for the third time through Finnbogasson’s deft touch. After a nervy end to the game, Olympiakos held on for the win and one which has put a serious dent in Arsenals aspirations of qualifying for the knock-out stages.

Over in Porto in the other game of the night involving an English team, Chelsea were dominated from start to finish as they were beaten 2-1 by FC Porto. After being criticised by ex-Chelsea player Andre Schurrle in mid-week for having his favourites who are guaranteed to start every game, Mourinho was clearly irked by this and made a statement by dropping both Eden Hazard and Nemanja Matic to the bench after both have had slow starts to the season. The gamble didn’t pay off though as Porto deservedly took the lead through Bras Andrew in the 40th minute. Chelsea responded well and their resistance paid off on the stroke of half time as Willian equalised with a pin-point free-kick. Despite their equaliser just before half time, it wasn’t enough to spur Mourinho’s team on and they conceded a sloppy header from Maicon early in the second half. Although dominating the majority of possession, Chelsea didn’t really create many chances and leave Portugal empty handed and in third place in their group.